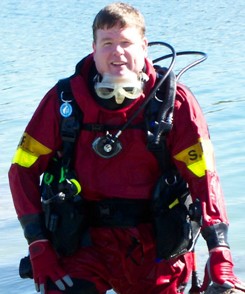 Kurt Started diving in 1972 to help out his brother Randy, who had been certified as a diver while attending Western Illinois University. But when Randy was gone to school, Kurt had no one to dive with other than the few Sheriff Department divers or the Firefighters. Kurt worked for several area law enforcement agencies throughout his career starting with the DeKalb County Sheriff's Dept., Maple Park PD, Elburn PD, and finally, the Kane County Sheriff's Department where he was in charge of their Dive Rescue Unit. Kurt and Karen opened CDV in May of 1983, and have been running classes ever since. In 1996 Kurt became an instructor for the Handicapped Scuba Assoc. and started to teach for the International Association for Handicapped Divers in Houston, TX at the DEMA trade show. Fraser convinced Kurt to cross-over to the IAHD, and a great partnership was formed. Since then Kurt has traveled to Key Largo every December to help train new instructors and persons with disabilities about the freedom diving gives to people with disabilities. For the past three years, their group of dedicated instructors has been giving soldiers back from the war the chance to scuba dive as a form of therapy. In 2009, the Eagle Divers and Deptherapy had the first ever multi-national soldiers dive in Key Largo, with three Royal Marines coming over from Great Britain, as well as the groups from Ft. Campbell, and Walter Reed. Thus making this the first international meeting of the soldiers and their spouses. In 2010, Kurt helped Fraser Bathgate form Disabled Divers International the newest Training agency for people wishing to train persons with disabilities. He was instrumental in co-authoring the DDI instructors manual along with Sole Viktor. Kurt and the staff of CDV have been designated the Instructional staff for the Eagle Divers group of Fort Campbell, KY.

Karen has been diving since 1979 and has been an Instructor since 1982. She has been active in all aspects of training. Karen is an Instructor Trainer thru NAUI, Master Instructor thru NASE, and MSDT thru PADI. She is also Co-Director of the Midwest Water Rescue Dive Team, as well as a Certified Public Safety Scuba Instructor through Dive Rescue Int. Karen was also a Certified Paramedic and Corporal within the Patrol Division of the Northern Illinois University Public Safety Police Department and retired after 22 years of service, as well as over 8 years of service for the Dekalb Co. Sheriffs Dept. Karen currently works as a certified paramedic and patrol sergeant for the village of Maple Park, IL. Karen is also a certified Repair Tech with several equipment manufacturers. She is well versed with all the aspect of the training, and store sales. Call and ask her about anything related to diving and she will be more than happy to answer your questions.

Clark has been diving since 1986 and has been working as a police officer for over 20 years. Clark has been an active member of the Midwest Water Rescue dive team for over 10 years, and has completed his Underwater Crime Scene Investigator course and will be using his new skills for the Aurora PD as a member of their SOG team. Clark also completed his NAUI instructors training course in July of 2015.

Jordan has been a member of CDV for over 20 years and has been diving for over fifteen years, and can answer questions about all of our kids' programs, and equipment.

James has been diving since 1985 and was also a patrol officer for the Aurora PD, having just retired after 20 years of service, and an active member of the Midwest Water Rescue dive team for the past 12 years. James has also completed his Underwater Crime Scene Investigator course and used these skills for the Aurora PD as a member of their Dive Team.